Baby on the Subway 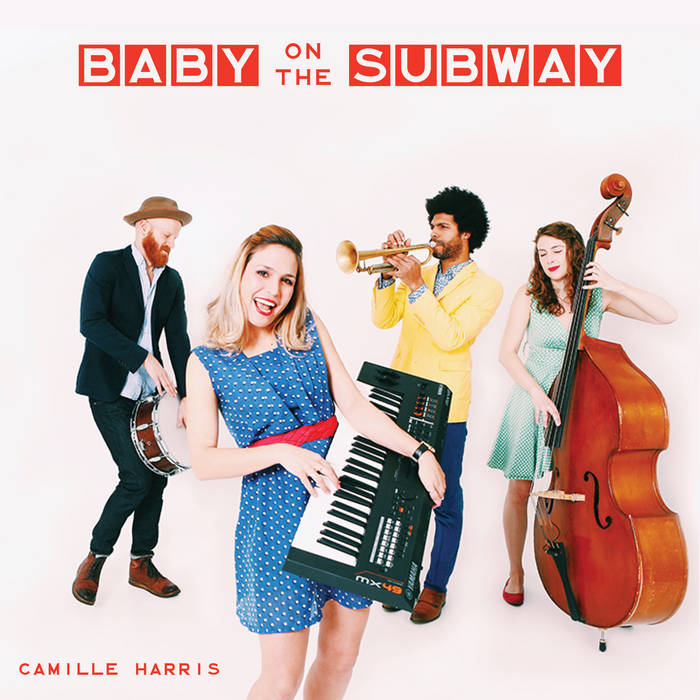 Mixing sparklingly fresh, re-imagined renditions of well-loved traditional children’s songs with her own effervescent tunes, Camille had the benefit of a five-year seasoning at Brooklyn Public Library branches, where she “kid-tested” her music in front of thousands of children.

A sweet sense of humor is never far from the surface of Camille Harris’s songs, and many were originally written to play for adult audiences. “Children have the ability to appreciate sophisticated harmonies and playing, so I wanted to make an album that is both silly and complex, using the most skilled musicians I know,” explains Camille. “Listeners will hear influences ranging from Stevie Wonder, Esperanza Spalding, and Snarky Puppy to Tom Lehrer, Stephen Sondheim, and the joyful sounds coming from today’s NYC jazz scene.”

Because she comes from a musical theater, stand-up comedy, and vocal jazz background, Camille Harris brings to the proverbial children’s music table a body of work that honors all of those traditions. Her own quirky sense of humor and wide-ranging vocal abilities (she’s a classically trained soprano as well as a “Broadway style” belter and an accomplished jazz songstress) set her well apart from the crowd.

Baby on the Subway kicks off with an explosion of up-tempo “Jiggly Wiggly” energy that speaks with a decisive Latin accent, courtesy of a fabulous trumpet solo by Wayne Tucker, Camille’s irrepressible vocals, and outstanding work by drummer Dave Tedeschi and pianist Hila Kulik. Next up is “Chopsticks,” a fun number that jumps into some splendid four-part vocal harmony inspired by the legendary vocal jazz group Lambert, Hendricks and Ross, employing rhyme after rhyme paying homage to Camille’s favorite Chinese restaurant in her home town of Boulder, Colorado.

One of Camille Harris’s first compositions, the pun-filled “Muffin Man” is a fine warm-up for the many puns and jokes heard throughout Baby on the Subway. Here the band employs an elegant swing style that provides a great setting for Camille’s superb jazz improv chops as well as her classy way of handling lyrics. In the funny, Latin-tinged “Procrastination Song (Untitled)” the joke is that Camille has been putting off writing the song’s lyrics, and, alas, she has yet to get around to giving the song a real name!

Other highlights include Baby on the Subway’s title track, a rock ballad that celebrates the way that people from all walks of life come together in sincere admiration of smiling babies on the subway, and “Backwards Alphabet,” a backward glance at ‘60s beach rock as popularized by Camille’s favorite Mouseketeer, Annette Funicello, in the “Beach Party” movies in which she co-starred with Frankie Avalon.

I started performing my show, Silly Jazz with Camille, at the Park Slope Library back in 2014. The only songs I had in my repertoire at the time were ones I had written and previously only performed for adults while doing stand-up comedy in back-rooms at bars around Brooklyn: "Procrastination," "The Jiggly Wiggly," "Spock is Hott (a vulcan love song)," "The Muffin Man," "Baby on the Subway," "Chopsticks," and "Kindergarten is for Communists (and I won't go.)" Relatively early on in the process, the Star Trek love song was deemed too salacious for young people and "Kindergarten is for Communists," a send-up of McCarthyism and the Red Scare through the eyes of a five year old intent on playing hooky from school, ended up getting dropped because of too many complaints by "Park Slope Parents" who presumably either didn't understand the subtleties of satire in a children's song or who didn't want their children exposed to the concept of socialism during this difficult and key point in their child's development in which authoritarianism rules the home life or else no one eats, bathes, or makes it to school on time. (If you are interested in hearing these songs, they are both available on my accidental "children's" EP titled Silly Jazz.)

As for the rest of the tracks, it turned out that children laugh just as hard at monster noises, silly dance moves, puns about baking, and jokes about procrastinating writing a song about procrastinating as "merry" or "celebrating" adults do. Also, I discovered that young people respond enthusiastically to jazz harmonies and rhythms, so the transition from grown-up crowds to kiddie crowds was a no-brainer. "The Aegean Sea" was meant to be a song on one of my jazz records, but I've also learned that children love a groovy bossa-nova, so it ended up here. Check out that piano solo by Hila Kulik. Wow, she's a force.

In fact, all of the musicians on this album are extraordinary players who I'm grateful to call my close friends. Wayne Tucker has written the horn parts on each of my albums and has heard the first drafts for each of these songs. Georgia Weber, the veterinarian for my cat, Purrsephone, and my trusted harmonic advisor has introduced many a child to the word "contra-bass" and her glee while playing these delightfully silly tunes has inspired many a joke written simply to make her laugh while she plays. Dave Tedeschi has been part of this project from its inception and I have come to rely on his sensibilities to help inform the sound I am trying to achieve. Bill Todd, Tom Larsen, Laura Dadap, Tamir Shmerling, Marianne Cheng, Colin Egan, and Carolyn Meade all leant their invaluable talents to this and I can hardly believe I could be so lucky to have them. Dev Avidon engineered and mixed this record and it is as much his work as it is mine. He devoted countless hours to make it as perfect as can be and without his commitment and enthusiasm, it would still be just a pipe dream. Maria Triana added the sparkle with her brilliant mastering and Haley Peterson brought it to life with her gorgeous graphic design.

This album is a culmination of five years of testing material in front of large groups of children and their guardians at Brooklyn Public Library branches around the borough. Without the thousands of little dancers and hundreds of wonderful library employees, this album would not have been made.

Nor would it have been made without the countless schleps to piano lessons, voice lessons, jazz camps, theater rehearsals, and performances by my parents, Angel and Steve Harris. Thank you for teaching me that there is value pursing a life in the arts.

It is my wish for you, dear listener, that you know and truly believe that this album was made for you, yes you, with love and respect for your intelligence, your sense of humor and your sense of wonder.


Dedicated to my family and my students

Special Thanks to The Brooklyn Public Library, Paquita Campoverde, The Park Slope Library, Jack Roberts and his family, The Williamsburg School of Music, Joanne Lamun and The Peanut Butter Players.

A comedian and musician based out of Brooklyn, Camille "...devotes her music to the art of silly. Her focus is fun but her vocals carry the gravitas of dust-bowl beaten jazz singers from 1937." -Fenceposts

This first EP "Silly Jazz" is a collection of 5 of her original comedic jazz songs. A follow-up EP of 5 more of her original "serious" songs will be released in 2014. ... more

Bandcamp Daily  your guide to the world of Bandcamp